Ted A. Liggett was a self-made successful business owner in the entertainment industry before turning to the study of law. His unique blend of real life experience and legal training gives him the proper perspective to relate to and empathize with the individuals he represents.

Ted has over 20 years of experience as a personal injury lawyer and has dedicated his entire legal career to helping those who have been physically injured or suffered injustice due to the intentional actions or negligence of other individuals and corporations.

While Ted has plenty of experience representing clients in matters ranging from contract disputes to partnership dissolutions, his primary focus is on personal injury litigation. He has successfully completed, either through jury verdicts or settlements, thousands of cases. In this regard, Liggett’s resume includes, but is not limited to, such areas as wrongful death, oil field accidents, truck accidents, car accidents, motorcycle accidents, shootings, disfigurements, spinal injuries, broken bones, amputations and workplace injuries.

Ted also has the privilege and distinction of serving as the personal attorney for Mike Leach, the most successful coach in Texas Tech’s football history and who is considered one of the most influential offensive minds of the modern football era. Ted and Mike’s relationship is well into its second decade and the future is sure to include many exciting developments. Further, recently Liggett finished his term of almost 10 years as Chancellor to the Most Reverend Bishop Wallace Ohl and the Episcopal Diocese of Northwest Texas.

He received his undergraduate degree in Political Science and English from Southern Methodist University where he was recognized by the Golden Key Honor Society. Ted received his Juris Doctorate from Texas Tech University School of Law.

While at Texas Tech, Liggett excelled in the Advocacy Programs. He was one of only three second-year law students to be invited into the prestigious Board of Barristers Society. He won the school’s advanced Mock Trial competition and represented the Law School on the Trial Advocacy Team. His team won the Regional Championship and went on to Miami, Florida where they placed third in the National Law School Mock Trial Championship Competition. 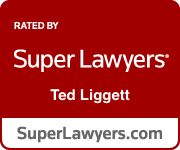 We are here to get you the help that you need!
Watch this video to learn why we do what we do.

"Mr. Liggett and his staff are truly a blessing! I was so nervous when I went into the office, but after meeting the secretary, all of that went out of the window. She was so friendly and caring! To be honest that same kindhearted spirit was with everyone that I encountered (Sara, Roger, and Mr. Liggett)! Thanks for everything!"